Goodbye to our Beloved Indy 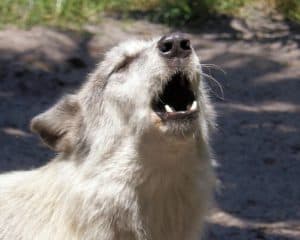 ur beloved Indy. Her full name was Miss Independence. Indy was fighting a battle with melanoma, which grew very quickly in her mouth. Every day it was changing in size and in color, so we helped her cross over the rainbow bridge yesterday afternoon at the sanctuary she’s always called home. She was 13 years old and lived an amazing life, inspiring thousands of guests with her determination and great attitude. Indy was central to our Healing Hearts program with her courage and compassion.

One of three pups seized by Fish & Wildlife Commission in 2005 due to the conditions in which they were found, she was the only female and was the least social of the three. This group was very interesting in many ways. They were born three different colors (white, grey, and black) which is a sign of in-breeding as wild wolves are generally all born dark and lighten as they mature. The pups were featured in Nat Geo Kids Magazine due to their uniqueness.

Indy was black as a pup but had phased early to a lighter color with lots of grey. This group of pups showed us that, like humans, animals are born with their personality. All three pups were acquired at 3 weeks of age, handled daily, raised the same and bottle fed by volunteer coordinator, Sue Stefanelli and founder, Nancy Smith. Tien loved to interact with people, even strangers. Chocowa was the middle of the road guy that would warm up to people quickly but was definitely less outgoing than Tien. Indy was very timid of strangers, and took a while to warm up to volunteers, but she loved you once she got to know you.

Indy was our very happy girl, even when she went completely blind due to Glaucoma. When Tien passed, after spending his whole life with Indy, we were able to find her a new companion and a very gentle soul, Taavi. We had a lot of concerns about introducing a new animal to a blind wolf but he came at the right time, almost as if ushered in by Tien to watch over his sister, and never once got cross with her.

Both of her brothers passed a few years ago due to cancer. Indy can run free with them and see clearly now that she has crossed over the rainbow bridge. We will all miss her dearly.