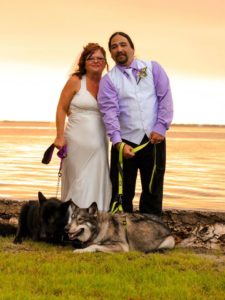 Holly was a firecracker whose passion led her to rescue all animals. Her first animal love was wolfdogs and doing everything she could to keep them in their home and out of Rescue. She was a founder of WAGS (Wolfdogs Assistance Group and Support), a board member at Southern Ohio Wolf Sanctuary, and volunteer at Shy Wolf Sanctuary. Holly would spend her own time and money counseling struggling owners on behavioral issues, containment, proper diet, and many other topics related to caring for these special canines. Introduced to wolfdogs by her Uncle Tom, who also raised her, Holly carried that love for this misunderstood animal throughout her life. The love continued, even including her own four-legged “kids” in her wedding to her soul mate Steve.

Living with and learning from wolfdogs, purchased and rescued, gave Holly a unique insight into the challenges and rewards that come from sharing your life with them. Kasa was sought out and taught Holly patience and unconditional love. Her greatest lesson might be that sofas can be replaced, but time is a precious commodity. Holly dreaded the thought of losing Kasa, as she had Ranger, but opened her heart to another rescue Luca. Always doing what was best for the animals, Holly would work tirelessly to find the right adopter, home, or solution for an animal in crisis or need. That was never more evident than when she rescued and rehabilitated an emaciated girl named Blue, then had to rehome her to give Blue the best possible life. 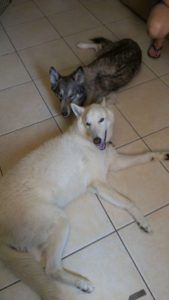 Shy Wolf Sanctuary is committing a minimum of $500 per year to this fund and will use any Memorial Donations to supplement efforts at keeping pets, primarily wolfdogs, in their home. We frequently receive requests to rescue animals due to the owner’s inability to pay for needed vet care, proper containment, or even a pet deposit at a new home. Shy Wolf has handled these rescue requests on a case-by-case basis, doing what we can whenever we can, to assist. The Holly Yager Torres Memorial Fund will be a dedicated budget that will enable Shy Wolf to accept applications and process requests for assistance. Holly’s drive and commitment will live on for wolfdogs and other animals in need.

Funds will assist SWS in keeping animals in their home and out of Rescue.

Holly Yager Torres left us too soon on May 12th, 2020. Her spirit lives on in this fund.

Thank you for donating in Holly’s honor to help wolfdogs and animals in need!