Every spring Shy Wolf Sanctuary Education and Experience Center receives calls from good-hearted citizens begging us to trap and save the coyotes in their neighborhood. The callers are worried that the coyotes will be killed, but also don’t want them living next door. It’s our experience that coyotes must be left in the wild. This is their natural habitat. They are hardwired to be feral creatures, and treating them like domesticated animals can be risky. The orphaned bottle-raised coyotes that we have accepted into the sanctuary have not transitioned well to captivity. Despite having been hand-raised, they are still untrusting of almost everyone, anxious around activity and people, and prefer to hide most of the time. Adult coyotes captured and placed in captivity would fare even worse.

Identifying Coyotes
Coyotes are classified as Canis Latrans, under the same umbrella as wolves and dogs, and can be easily mistaken as wolves. Coyote and wolf pups look very much alike, which is what happened to Morgan when he was found by a man who thought he was a wolf pup. Coyotes have pointed ears, long snouts, and hanging tails. Their eyes are yellow, and the fur is often grayish brown with black-tipped tails and reddish streaks at the face and ears. However, depending on where they live, their fur can also be gray, white, tan, or brown. On average, they can weigh up to 35 pounds, but some could go as heavy as 40 to 50.

Behavior
Coyotes are generally timid. They can be nocturnal when hunting but could also be out during the day, depending on their source of food and need to hunt to feed their pups. When communicating, they use yips, barks, howl sounds, scents, and visuals.

They can hunt in packs but generally live in pairs or individually. When in packs, they have a highly organized social system.. For coyotes living in urbanized human population, the pack includes a male and a female and their litter. One of the biggest ongoing coyote behavioral studies focuses on Chicago. Coyotes have found their way across the Jolly Bridge and onto Marco Island locally.

Habitat
Coyotes were originally found in open areas such as prairies and deserts of central and western parts of North America. Over the years, they occupy most of the continent. In the Northeast they have even been found breeding with wolves to create a new hybrid Coy-Wolf. This migration was enabled by man’s persistent hunting of wolves in the lower 48 states. Wolves were the top canine predator and kept coyote populations in check. Coyotes assumed that top position when wolves disappeared. Due to the development of more human settlements, some coyotes find their way into the human population such as in the cities of New York and Los Angeles, even riding subways to get around.

Diet
Coyotes are omnivores and would eat almost anything from insects and small animals to fruits. They are known to be opportunistic predators and will eat what is available. As they move toward densely populated human settlements, they eat livestock, small pets, garbage, and leftovers. Care needs to be taken in disposing of or storing food to prevent these opportunistic and intelligent animals from becoming dependent on or interested in acquiring food from people. Similar precautions to protecting food from bears and raccoons should be utilized. Feeding any wild animal is highly discouraged and puts that animal’s life in danger, as it can and will become a nuisance animal. Once labeled a nuisance it will be euthanized. 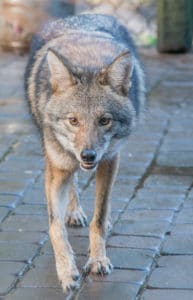 Offspring
The breeding season for coyotes is between January to March. When preparing for their young, the females build dens. Female coyotes could produce up to six puppies and carry their young for around two months. The males help in taking care of the young through food provision and protection from other predators. Puppies start blind and would later open their eyes after 10 days. Interestingly, research has shown that coyotes adapt to the environment even in the size of litters produced. When attempts are made to eliminate coyotes from a certain area, the next year’s litter sizes increase to compensate for man’s efforts to control populations. Wolves have been the only successful control mechanism.

FWC Rules
Florida Wildlife Conservation Commission regulates all wildlife. At one time coyotes were considered nuisance animals and an invasive species. They have been reclassified to be considered native now, since they have migrated of their own accord. Being native does not free them from the nuisance label, and they can still be hunted pretty much any time and for any reason. Wild coyote pups can now be rehabilitated and released, but the rules for release are stringent and challenging to meet. Whenever possible, it is best to leave coyotes to their own devices and alone.

Coyote Encounters
Coyotes generally want nothing to do with people. They are very athletic and have been known to climb or jump even 8′ fences, so monitor your pets while in your yard. Never allow cats or dogs loose and unattended in areas where you suspect coyotes reside, as they would be easy prey. Carry a small air horn, available online or through marinas, when walking your dogs if you know there may be a coyote in the area. The loud noise created by an air horn would startle the coyotes and should scare them away. Be prepared, however, as it will also scare your pet and may cause it to spook.