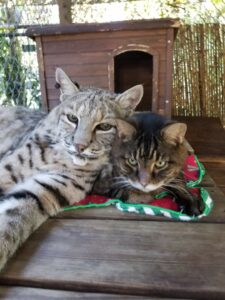 It is with heavy hearts that we share the passing of long-time resident Bobleo the bobcat.  He was 20 going on 21 years old, and had lived a long and full life. Bobleo’s last day was spent having his usual rats for breakfast, snoozing with his bestie Boomer, and telling volunteers how to clean his house.  Bobleo warmed up enough over the years to us that he would play with cat toys on occasion and would even come up and bow his head for a few good scritches. He never allowed us the luxury of stroking his beautiful spotted coat until it was time to say goodbye.

We first met “Leo” in 2011 when we were contacted by his owners who were no longer able to care for him. At already 9 years old he had lived his life in a house with other domestic cats. The initial transition to Shy Wolf was difficult for a cat who had never been around other larger animals, nor had stepped foot outside. In our efforts to help Leo adjust, we changed his name slightly and adopted a friend for him from the Humane Society of Naples named Boomer.  While most animals adapt pretty quickly to life at the sanctuary, some require more time and effort.  Cats don’t adjust as easily as canines, we’ve found, and Bobleo was not eating anything we tried feeding him. Ultimately, we had to send him to the University of Florida for testing and learned that he was lacking B1 Thiamine causing his anorexia symptoms and needed a special diet to trigger his prey drive and desire to eat.  As always, our founder and volunteers did whatever was necessary for the animals in our care and began feeding a live mouse diet.  The plan worked and Bobleo thrived. We were very happy, however, when in later years he decided he was okay with a change in diet.

Bobleo loved rubbing heads with his former owners and took a special interest in ball caps. Our volunteers were first able to interact with him by extending a ball cap to allow him to scent roll on, bridging the gap between his old friends and the new ones he found at the sanctuary. That initial interaction led to Bobleo seeking head scratches by walking up to volunteers and bowing his head. When he approached you in that way you felt very honored and were happy to oblige.  Always his own cat, Bobleo would never allow us to groom him and often sported long dreds around his head. We’d place special brushes and objects for him to use as scratching posts hoping that he’d see his way to using them and clean up his look a bit.  Bobleo was secure enough in who he was to pose for the Curious Critters children’s books with a white background and is featured as the model bobcat in several of the state specific books by David FitzSimmons.

On Sunday, December 11th everyone had left except one staff member. All had been normal and Bobleo had been acting his usual self. Anna, his wolfdog neighbor, started barking incessantly alerting the staff member to something going on. Thinking that it was Anna in distress, he made his way back to the cat run to discover Bobleo experiencing a seizure. We immediately took action and staff got him to the emergency room vet as quickly as possible. When older animals suddenly have seizures it is often a result of a brain mass. The seizure didn’t abate and his fever spiked, requiring us to make the decision to say goodbye.

Bobleo’s relationship with Boomer was one for the ages and was documented in many photos. We’d often see the two of them snuggled up together in the house on cooler Florida days. Please keep Boomer, our staff, and volunteers in your prayers as we adjust to life without this special bobcat who educated so many visitors over the years.

CONNECT WITH US!
For the latest videos and photos of our residents and rescues, follow us on social media!