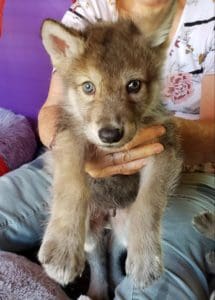 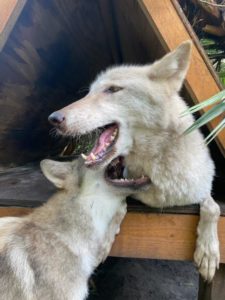 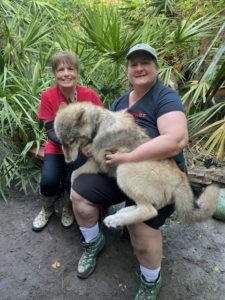 In July of 2021 Shy Wolf Sanctuary was contacted by a detective about an aggravated abuse case they were working.  The animal involved was on the East coast of Florida and only three months old. Because he was listed as a wolfdog, the detective wanted him to go to a facility equipped to deal with his inherent nature and any issues, physical or mental, resulting from his early treatment.

Due to the nature of his situation, pending charges and court dates, and the complexities of our legal system, Shy Wolf chose not to share or announce this new resident until some closure had been reached legally.  We learned in early May that a plea agreement had been reached by the suspect and the prosecutors that involves steps he needs to complete.  We cannot say that we are thrilled by the fact this person will not serve time in jail, but we choose to focus on the positive outcome for the animal, and hope that the human has learned and will do better in the future.  He is now over a year old, having taken 10 months to reach this agreement.

Tewa is the name our Founder chose for the new arrival, meaning a member of the Pueblo people of the Rio Grande, only three months old and 12 pounds.  He was about 20 pounds underweight for a wolf pup and the DNA shows he is as high as Embark will provide on their testing at 95+% grey wolf.  Florida regulates the ownership and containment of wolves and requires import permits, when done legally, for any animal brought into the state.  Tewa’s breeder thought they were selling to people that lived in their home state, but that was not the case.  Tewa ended up being owned by a young couple with other large dogs, and living in an apartment in Florida.

While the treatment he was subjected to was horrible, it resulted in the positive outcome of Tewa being sent to the sanctuary where he lives with another wolf, Namid, and could learn how to be who he was meant to become.  This very large and special boy continues to enthusiastically greet new volunteers he meets, and we have hopes that he can now focus on becoming a great ambassador for his species. Tien and Bear set very high bars for our ambassador wolves, but we believe Tewa can meet or even exceed those standards.

Tewa will likely have life-long concerns related to some of the injuries he sustained at such a young and formative age.  Shy Wolf is committed to providing all preventative and treatment options for the duration of his life…which we hope will be very long.  Our oldest canine has passed her 18th year. so Tewa has another huge goal we’ve set for him!