In early summer of 2010, Shy Wolf Sanctuary was able to provide a home to four, 3-week old pure wolf puppies who were “accidentally” born at another facility. We gladly welcomed Misun (the only male), Maraya (the only black one), Chatima, and Namid. When the pups were about three 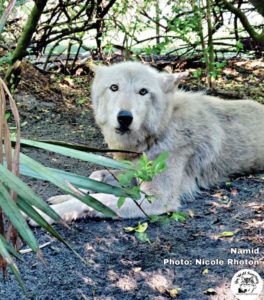 months old they contracted an unknown condition which put their lives in jeopardy. After a lengthy stay at the animal hospital, blood transfusions, and many vet bills they emerged as happy, friendly pups who can’t get enough attention from our volunteers.

In the beginning they lived in our spacious isolation enclosure but after some time passed, and they grew bigger, we found it increasingly difficult to visit them. They literally very lovingly “attacked” anyone who entered the area. It was quite a site to see all four pups showering you with hugs and kisses. It was at this time we decided they needed adult supervision to calm them down. They were split in pairs and placed with adult wolves and wolfdogs that have done a great job teaching the youngsters how to live as wolves in captivity.

It is at this time we are starting to see different personalities emerge. They are taking on some of the characteristic of their adoptive “parents”. They have all become a bit cautious, a typical wolf trait, but Namid has grown into a dominant female that doesn’t get along with other females.  Until February 2017, she resided with Coosa, an older male wolfdog, who knew how to handle her and stood up to her when necessary.  A short while later, Lakota lost his mate Julie, and we were thrilled Namid and Lakota immediately loved each other. Namid remains loving to those select few volunteers she chooses, but has shown a willingness to challenge volunteers even when they are trying to take her for a walk. Namid is one of those animals that needs to be understood and respected for who she has become.