Florida Panther, Puma, Cougar, Catamount, Painter, Screamer, Mountain Lion…all describe the same impressive cat. The largest of the  purring cats, Felis Concolor can vocalize on both the inhale and the exhale. 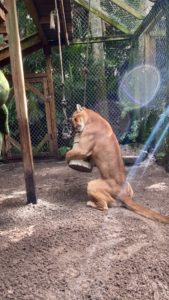 Commonly known locally as the Florida Panther, this cat is actually not of the panthera species (leopards, jaguars & tigers) which only vocalize on the exhale.

They also come only in the tan color you see exhibited by Cimarron. There is no “Black Panther” as any black cat would be either a leopard or a jaguar. Born in captivity, Cimarron’s life started out with a lot of attention. He was played with roughly and as he grew their method of control at the facility was to hit him over the head with a lead pipe.

When the USDA shut that facility down, he was sent to one north of Tampa. The plans were to introduce him to their female cougar. Having never learned how to be around other cats, he was too rough with the new girl and they began looking for someone to take him.

That’s when Shy Wolf Sanctuary stepped in and Cimarron came to live with us in late 2010. He was given our largest, two – story habitat and enjoys laying on the top platform where he can watch over everything that happens. Cimarron loves new scents and especially enjoys getting the Christmas trees we plant in the habitats!