Little Miss Bella doesn’t look like much, but she is a force with which to be reckoned! She and her brother had been purchased by a woman who had no idea what she was getting into. She wouldn’t reveal the name of the breeder, but both animals were shy and terrified and escaped her house several times. She brought them to the shelter, they were adopted out 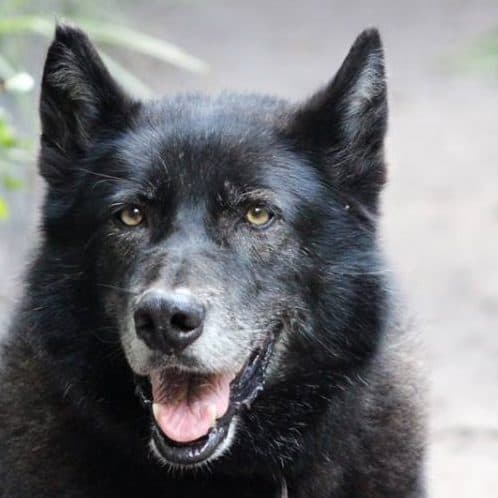 again, and they escaped again. When little Bella and her brother were recaptured, they were sent back to a shelter. The shelter then contacted us as the man who had adopted her brother had decided against adopting a second one at that time. We knew from her photo that Bella would take a lot of work and may never be “adoptable” as “pet quality”…meaning she might warm up to people, but was unlikely to adapt to living with a family in a home environment and would always remain a flight risk.

We had a couple of males (Yuki and Koda) that we had taken in and decided we would bring Bella to Shy Wolf Sanctuary to see if she would be adoptable and, if not, to be a companion to one of our males. Bella loves to play, has a real sense of humor, is always conspiring to steal Yuki’s food, and has warmed up to a number of our volunteers.

For several reasons, Shy Wolf Sanctuary has a policy of using two collars and two leashes any time our animals are outside the perimeter fence. One collar is a backup (flat nylon) and the other is a control or training collar or harness. Wolves and wolfdogs can crunch through bones, so they have no problem biting through a leash when scared or determined. Also, animals have been known to “put on the brakes” and back out of collars that were not on securely enough. With two leashes, an animal that suddenly becomes aggressive can be “cross-tied” between two people to keep them safely away from them. Some of our volunteers have found that this is a good practice even with their domestic dogs.

2020 Update:  After the loss of Bella’s long-time mate Yuki, we were able to introduce her to another pair of senior residents.  Mia and Cree easily welcomed the new lady to their pack.  She’s helped them out by motivating them to eat faster and be less picky about their diets, a win for all three and the volunteers!